As Christmas draws ever closer, many places of work and education are beginning their festivities and many of these include little award ceremonies. Our Workforce and Education directorate at Lancashire Teaching Hospitals is no different with our own spur of awards from our more ‘Official’ one done each spring, and we take it pretty seriously.

As mentioned in my Friday Mike Project report, this awards night was possibly our largest one we’ve ever undertaken in the Trust and commanded some serious hardware planning

The other half of the project of course required collecting, encoding, testing and compiling the multimedia side of it all.

Traditionally our awards have run on Microsoft’s PowerPoint platform, owing to the familiarity for many of our staff in addition to it being installed as standard on all of our authorised Windows computers. We also found it useful as the vast majority of nominations for our categories, when short listed are either submitted as either or a combination of: spoken word, PowerPoint slides or Prezis, live action film, animations/motion graphics or free media that can be made into a video – all of which are doable on our setup (with Prezi Pro on Desktop being an Alt-Tab job with a cheeky freeze of image on the projector). This year I was responsible for compiling this show into a preferably single packages and compressed file to be played back on a single PC that would be taken to our venue.

Last year, we tried to make things lighter by running two laptop computers with some teamwork to switch between the two and make the whole thing appear seamless. This however proved difficult and unnecessary work, so the hope was to condense it with quite a few lessons learned in the process of this.

When completed in this format, we amassed over 200 slides worth of content and gigabytes worth of media to embed. Over a course of two weeks this consumed my general day to day work of compressing files, testing and embedding, trying to ensure as much of our content was in HD (with most coming out as 1080p 25fps in either native WMV or converted from H.264 encodings) as possible so as to not only look great on the amazing equipment Pure AV supplied to us, but also to allow the people 15m away from the screen to enjoy it in some clarity in comparison to our previous offerings.

In addition to the compilation, I was also responsible for the design of the on screen graphics this year including the introductory animation. This was due to my colleagues being busy and with me having an idea early. I was happy to accept the idea and use this as an excuse to practice my beginner skills in both Blender and Adobe After Effects.

For the sake of clarity in discussion, here is the final rendered and composited model with After Effects text and flare: 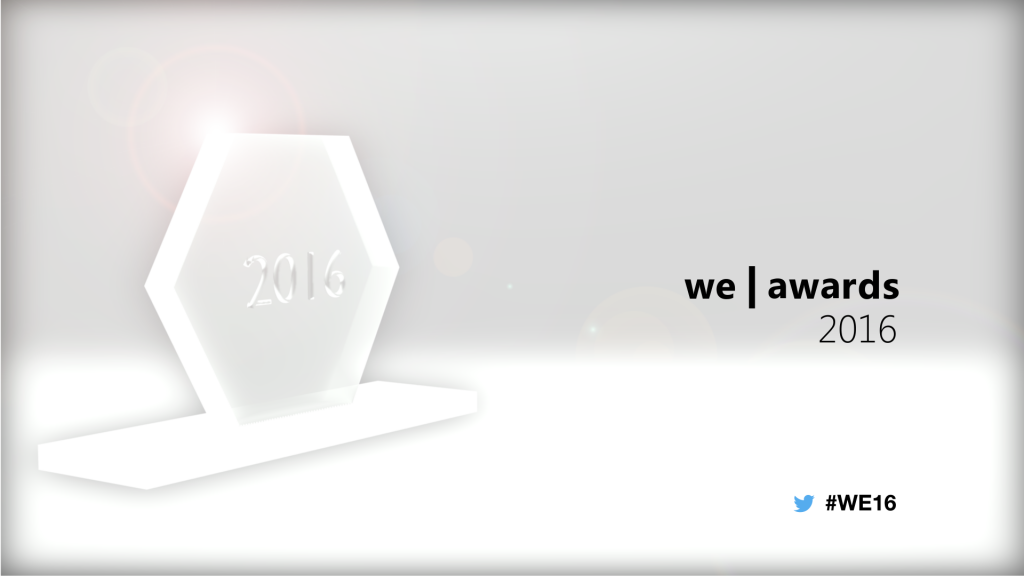 The whole initial scene was built in Blender using simple mesh shapes and a heavily bevelled, extruded text object for the date. These were all then coloured white with a small emission value and ~75% opacity (I sadly don’t have the .blend file on me at the time of writing for the exact numbers). The background had a higher emission value with no transparency. These objects were then set up on different layers with the floor/wall having a strong spotlight blasted at it. These separate layers were then also rendered separately for compositing. The light blasted background was then given a Gaussian blur to smooth out the edge between them and add a gradient effect to the backing. The created trophy was then added in over the top using the “Alpha Over” node within the compositor and also added a light blur to soften the edges.

Once rendered and exported as a 1080p image, this was then added into After Effects for the animation of the text, most of which was animated as simple keyframed fades on and off. The exceptions to this rule was the “we | awards” title above which appeared as a growing line with the letters sliding out from behind the line – created using a clever combination of position and opacity keyframes all carefully timed to give the appearance of sliding. For the motion artists out there, I would have loved to use Masking with invisible boxes to stop the letters appearing on both sides of the line at the beginning but After Effects didn’t like me trying to do this over and over without separate compositions (which I didn’t have the RAM or Hard Drive space or indeed time to make this perfect, so had to be creative). The other exception is where the “we” theme continues with various categories.

I also contributed to an unplanned running theme that developed with the animations of the previous two years that were created by my colleagues David Leech and Adrian Hawtin, which is the use of particles serving different roles from floating dots to explosions. This year, it took the role of background snow throughout the loop with a slightly delayed start and a fade out at the end to enable a seamless loop. I also added a small lens flare which is shown in the picture above for a small bit of sheen and a subtle nod to our awards nomination video (for which we won the category) from the previous year where lens flares really added to our “A Team” theme .

Once animated, still were taken of each category appearing with the “we | x” heading removed and these were used in the show as the slide for each categories announcement. For all the other slides we used a copy of the image above minus the text, hashtag and lens flare as the background. Text for nominee names and the runner up/winner announcement slides were then entered in PowerPoint slides and styled using the same fonts used within the animation (a combination of Segoe UI emboldened and Segoe UI Light).

A third task I was entrusted with was the picking of walk up music for runners up/winners, the introductory music for our looping animation as well as helping take responsibility for the recording of selected voiceovers (which this year were used in place of people speaking live on stage) for presenters unable to add this to their presentation themselves for various reasons.

Due to limitations on timing and rules governing how much we were allowed to ‘help’ with each short listed nominees’ video, a limited amount of processing was applied to the 9 voiceovers I recorded, starting with the adjustments being designed on the first project, then saved as an “FX Chain” in REAPER (ie: A stored preset of plugins and their order/options saved) and applied as a base template to each subsequent clip/person with minor tweaks for different voices and room acoustics. I will update the post with the plugins and settings used at a later date so watch this space!

The music this year was chosen with a mix of this year’s chart music and some older favourites of colleagues with each song having a thematic nod toward either the winning team or the category itself. The introductory music was chosen from Audio Network using the music of Chris Blackwell as our chosen piece (which unintentionally matched many of my keyframes and cues allowing for a really well rounded display out of sheer luck!).

Whilst it was a very busy and very hard task to undertake it wasn’t possible without the help and guidance of my colleagues within the Blended Leaning Team as well as our organiser Alison Oliver, our good friends at Pure AV and the kind support of Epson and Best Western Park Hall. Many lesson have been learned with both the production and the outcome of the final performance and with what we achieved with the materials and time frame given to us we hope to create a better, more efficient and further innovative show for the 2017 awards.