Re-Wind Wednesday: Charms of the Sea

Tonight, I take a throwback at another project from University, this time one that was featured in a larger exhibition in the local community. As part of the London 2012 Cultural Olympiad (a series of cultural events that during the time the Olympic Village was opened to the closing of the summer games), a cultural initiative known as ‘Stories of the World: Precious Cargo’ was launched in Yorkshire, and our university became involved within our local section of it known as ‘Here be Dragons’ through a partnership with Apollo Creative – a sensory equipment manufacturer ranging from sound and light to assistive technology.

As part of working with Scarborough Museums Trust during this time, the university and Apollo Creative agreed to put on an exhibition within the town’s famous Rotunda museum for a period of two weeks as a complement to their content surrounding the collection of William James Clarke, a Scarboroian known for many talents and a particular interest in folklore and the creation of charms surrounding it.  Over time Clarke recorded and collected a wide range of charms that supported many uses from protection to good health and some even used to bring about good trade on the streets or a good catch out at sea.

The assignment for the class was simple – using a recently acquired touchscreen and a Mac mini, we would split into groups of 3-4 people and develop an interactive ‘patch’ with 2 screens using Cycling ’74s Max environment (Max/MSP/Jitter 5) involving information, video and clickable elements. These patches would form part of a larger experience surrounding a subset of Clarke’s charms, designed by our course leader, Dr Rob Mackay, and loaded onto the Mac Mini, with the touchscreen installed into a plinth acting as the main screen and a secondary output fed to one of the museum’s large screens mounted in a box on the wall. Given our small class size becoming 4 groups, we chose 4 categories of charms based on the  four aforementioned topics. The consultancy and management of the project was also taken on by Apollo’s Creative Director Mark Hildred, whom advised and assessed each group’s patch to ensure we were creating an effective solution for the visitors.

As the group I was placed in only contained the 3 of us we split up the workload into broad tasks, with me taking on audio recording and mixing, whilst my colleagues Bruno Siu took care of the programming aspect (known as ‘patching’ in the Max/MSP community) and John Maguire took care of the graphics, working off each other’s feedback to ensure a cohesive and high quality production.

This was a rather challenging aspect given the tight time frame we had to work against, however we always ensured each other’s back was covered and fortunately delivered our part sufficiently after a few drafts in design.

Following feedback from both Mark and Rob, the outcome was a very positive one, with our patches also being featured in the following year-group’s exhibition too, giving us a small sense of legacy.

Whilst the finished product sadly wasn’t photographed by me due to having a lacklustre picture quality on my Palm Centro smartphone at the time, however I have collected some resources including a scan from the local newspaper covering the event: 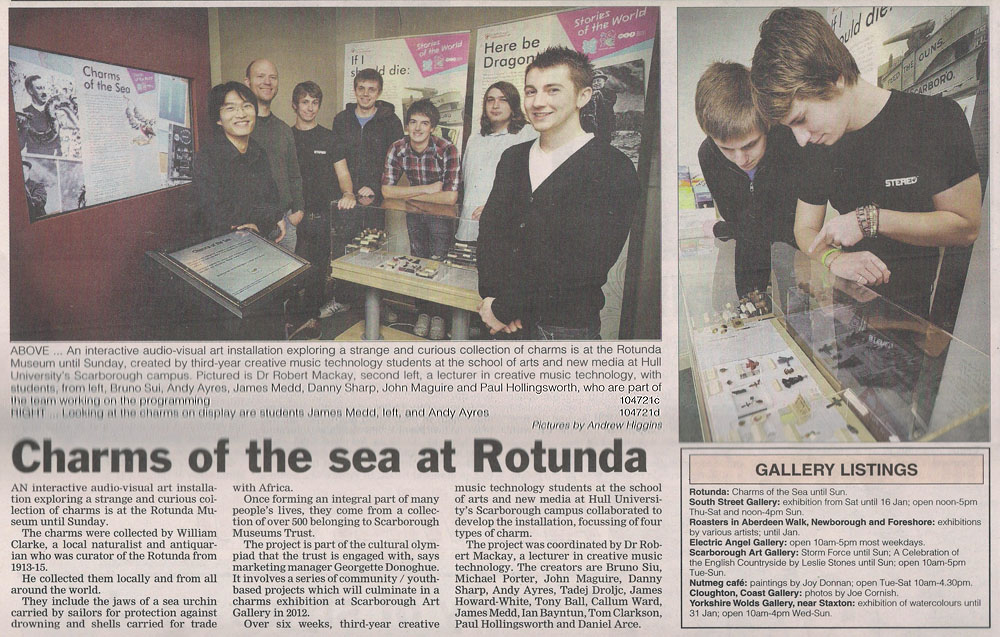